For my find & share exercise, I chose to talk about an artist whom I know personally.
My mentor and friend, Ben Timpson.


Ben was the Lead Artist in the graphic design studio at MyARTS for the first couple of years that I worked there. He’s incredibly talented and pretty damn fearless. He literally puts himself into his work (he sometimes uses his blood as a material in his work). It’s that kind of commitment and sacrifice that I admire. 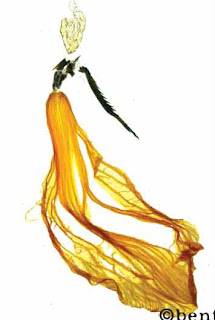 This is Ben’s “Centerfold,” made from a lily and part of a cockroach. Yes, you read that right.
The asymmetry in this piece shows a sense of movement and elegance in the figure. She seems like she’s dancing and floating around that space. The heavier, darker part of her skirt on the right side of the image balances out the rest of the figure on the other side.
There is a bit of continuation used with the implied connection between the figure’s head and her body. It’s totally disconnected, but it feels like it’s not.
The materials used also make a statement about the piece. A beautiful lily and a creepy bug. The contrast between the two materials describes the complexity of the figure. She is wearing a long, flowing, beautiful flowery skirt, but her upper body is made of this exoskeleton of armor.
She’s strong and beautiful, protected and vulnerable, feminine and rugged.
I think the asymmetry helps accentuate that as well.