One problem I always have with blogging is I never quite know what to say.
Well, I know what I want to say… I just don’t know exactly how to put it together in a coherent manner.
But I guess I’m doing an okay job so far…
Well, a little bit about me…
As some of you may know, I am a veteran KCAI student (and I even get alumni newsletters sometimes).
My first stint at KCAI was extremely short-lived. I attended classes for one day, and, being the nervous wreck I used to be, I left KCAI with my tail between my legs and ventured into the exciting world of community college. (…yay…)
Biggest mistake of my life.
After getting an Associate of Arts (that’s liberal arts, not fine arts… bleh.) degree, I put on my big girl pants and returned to KCAI in 2008. In the time that I was away from KCAI, I had gotten a job as, you guessed it, a graphic design apprentice. (Okay, maybe you didn’t guess it. But it’s still awesome.)
Between 2006 and 2008, I got a job at an art program, got promoted in my department, had artwork in three art shows, and discovered I was absolutely in love with graphic design.
2008 was the year that I decided I needed to be back where I belonged. KCAI.
Fall semester of Foundation went well. No problems at all.
After that first semester, I had to take two semesters off for financial reasons.
I finally returned for good last semester, and I’ve been enthusiastic and grateful ever since.
I hope the next three years are exciting and fulfilling.
Now, I’ll leave you with some lovely drawings of a lowercase “a.” 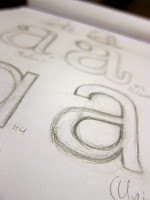 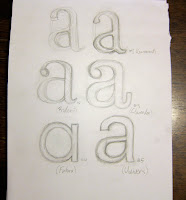